I've managed to get a little further on njal as well as another project that is nearing completion, which I think I'll just wait until it's finished to unveil, and start on a model I'm painting as a gift for a friend. First up is Njal Stormcaller, a very fun model to paint and I have high hopes for him as he has many small runes etched into his armor and will come out very striking if I can pull off the details right, as well as a cool expression on his face which is always fun to work with, I like the way people in the 41st millennium either yell or keep their face as straight as possible. 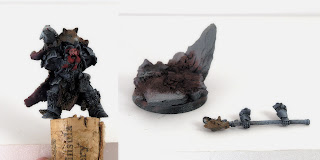 So I'd say his armor has a good basecoat to work with and next I plan to finish the furs and do some airbrush experimenting with his base and try to work some subtle purple, blue, and green in to the rock. I'm also looking forward to experimenting with different green and blue hues with the model I'm painting for my friend Adam. I asked him to throw me a single mini he'd like painted up, I was hoping it would be something non games workshop and something I wouldn't normally pick out to paint myself. I was happy to see what he had picked when he handed this guy to me.

A reaper sculpt of kind of a reaper, very metal indeed! It's really old school, I can remember being a kid and not even having enough money to buy minis like this because I was a kid with a 2 dollar allowance that I never got but it's kind of funny now because I'm grown up but I still feel like that little broke ass kid when a new games workshop kit come out...Adam intends to use him as his general for a game called song of blades and heroes, it's a game made by the guys who do flying lead (which I played once and can say it's fun). The game doesn't have it's own model range so players are encouraged to collect from all sorts of ranges.This is also cool for someone like me who is only looking for an excuse to buy more models from a wider variety of manufacturers. Well I'm done with minis for today but tomorrow I'm going to do some finishing of current projects which I can hopefully have up within the week. Later John -sam
Posted by samson at 10:12 PM No comments:

I just finished off an add on to a space wolves army I'd painted before, the client wants to add the Logan fangs drop pod unit along with some cyclone missle launcher toting wolfguard. His list has nothing but double combi weapon wolfguard and long fangs. So here are the long fangs, tabletop ready. 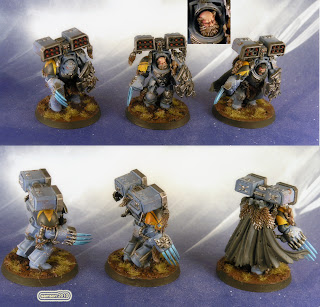 This commission isn't over yet though, I also have to paint up Njal Stomcaller which I've been saving for last as I get to pour some detail into this one and I don't want the deadline bearing down on me while I struggle to paint multiple models. The joy of doing a single mini is that once you've painted something you don't have to repeat it 10 times, any way here's a preview of him. 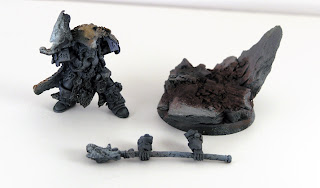 Hopefully I'll have time to finish him over the next couple of days so I can share the next project. I took a load of in progress shots while painting these guys too and I plan on putting that up as well. I also have some non space wolf  photos of a complete army I painted last week which I'll be posting in the near future.
Posted by samson at 9:45 PM 1 comment: