I picked this guy up yesterday as part of my deal with the hobby store to paint scenery for store credit. I want something to enter in the Lord of the Rings category at Gamesday Chicago this year so I perused the selection. I came across this shaman and decided he's the one.

Please excuse the photo, it came out weird and I just auto leveled it. I'm liking him so far, I had my doubts after examining the sculpt up close. The fun thing about this guy is that I'm doing him in all non-metallic metals in preparation for the Lord Draigo I posted earlier. Here's how far I got today, my friend and fellow miniatures painter Jake came over and painted with me. Very fun, I've been pretty starved for interaction with other artists let alone artists of the miniature painting variety. We also went to the park and grabbed some foliage. The shaman's base is sporting some roots from todays trip. 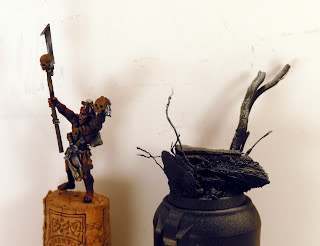 I have to say I'm really enjoying non-metallic metal, it's a nice change and a new challenge. I made the shaman's metal from various mixtures of black, shadow grey, and white. I think I'm going to figure out how to paint his base in a few minutes. I'll have more on how the comes out soon.
Of course I took pictures of the craters I painted for the store! 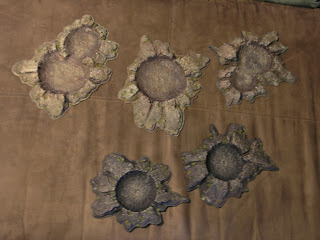 I'll have an E-bay goodie for you tomorrow so stick around ;)
Posted by samson at 5:04 PM No comments:

I just finished this guy off this afternoon, he's a commission from my buddy Dan who saw what I did, went to the store and grabbed a model he'd like painted. Neat! Good story, I know, I just found it funny that someone was like "that's cool! will you paint one for me?" So here's the finished product.

Coolminiornot link
http://www.coolminiornot.com/277336
He's been sitting around for a while and it feels good to finish him. The true metallics were tedious but fun. I'm not a big fan of metallic paints. I do however enjoy the way they look in the end but I've decided to take a serious crack at non metallic metals, just to bone up on some weaker skills.
My next order of business will be zazzing up some sanguinary priests, hopefully I'll have something to show you in the next day or two.
Posted by samson at 8:04 PM 2 comments:

I just couldn't resist grabbing this model when I saw the Grey Knights. Recently I've decided to study non metallic metal more and what better model to experiment on than Lord Draigo? Of course a standard table level base would not do so I decided I wanted him fighting among some recently ruined temple on a demon world the Grey Knights were destroying.

It was made from a piece of cork, Hirst art blocks, ruins from Sibor, some dirt, and some sculpting.
The next step in preparation was to find a few photos for reference. I grabbed these off line. 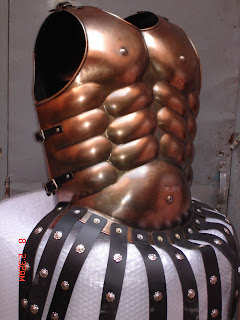 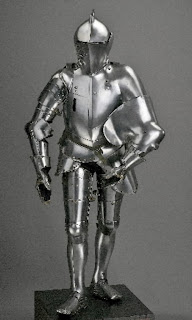 I'm very excited to start this project but before I jump into it entirely I need to finish some Sanguinary Priests I'm working on for E-bay. More on them soon.
Posted by samson at 7:12 PM No comments:

Phew, I'm exhausted, sorry for the lapse in posting. I was working on a friends movie for a week and was very sick due to being outside in random weather the whole time. But I am back and have survived the wilds. Recently an interview done by my friend Adam (http://atomsmashing.wordpress.com/)  was posted on Beasts of War. I didn't win anything but the video went up anyway which is fine with me, why not?

When I started this blog I didn't want to show my face. I decided that I'd rather just have people look at the work I'm doing rather that what type of person I look like or how magnetically handsome I am. I guess "I'm lifting my self imposed media black out"

Thanks to Adam and Eric for doing this it really made the event that much better and personal for me. Two really great guys! This year's Adepticon was a blast overall, I stretched myself a little too thin and told a friend I could fill a spot for his buddies in the team tournament 2 days before Adepticon. The team tournament entails over 12 hours of warhammering. I had a pretty shitty time in that tournament, the last game was my favorite though, even if we did lose it was nice to play some real people who were into having fun with the game. Fortunately I know exactly what the plan is for next year. Pack more beer and liquor, register early enough to get a swag bag, get a hotel across the street instead of the one the event is in (cheaper and it has free internet, laundry, refrigerator, and kitchen), take a painting class or two, and sit down to paint with some artists I haven't met before.
Here's a shot of all the cool loot I picked up this year. The nightly flea market was crazy. For $19 I got all the non enigma models. That includes an out of print ork, which I couldn't pass up for nostalgic value, a great 54mm from Scibor which sells for $24.40 from their site not including the shipping, and a Wulfrick the waderer mini. Brother John bought the wizard and haded it off to me, we're slowly re-building our scattered copy of Hero Quest. The other 2 minis I grabbed from the Coominiornot store. I wish I had more money that day.

You may also remember I painted my friend Kevin's army for the combat patrol tournament. It won best painted one day and he passed the plaque to me, thanks buddy!

The finished army is right here
http://samsonminis.blogspot.com/2011/02/finished-eldar-conmabt-patrol-and.html
Well that's about all I have to say that I didn't also sum up in my interview. Now that all the dust has settled for a while I have a whole month where I don't have to leave the state and I can really dig in to some hobbying. I'm thinking about blogging every day for a week again real soon.
Posted by samson at 6:47 PM No comments:

Here are 3 of my Crystal brush entries, I didn't place but I still love them the same. It was a great contest and lured in some of miniature paintings biggest names. Congratulations to the winners and I promise I'll see you next year.

Vulkan He' has an ugly chapter color scheme

Well this is not my finest hour. I finished off Vulkan and I have to say yep, I still don't like the green and gold color scheme. I think my disdain for this model showed up in my photos. Not my finest hour.

http://cgi.ebay.com/ws/eBayISAPI.dll?ViewItem&item=330552477566&ssPageName=STRK:MESELX:IT#ht_500wt_1156
I was all about this model when I built him but my love is gone now.
So naturally I'm interested in bartering this red headed step child out of my family for some cash on E-bay or a lamb or beer or something. 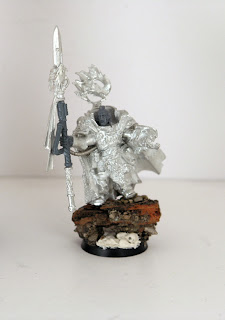 Here's a little before shot. I'm happy with the conversion. Simple and is still easily identified as Vulkan. In hindsight this might have been a good candidate for non-metallic metal.
Posted by samson at 9:34 PM 3 comments:

Just another quickie today. I drummed up another sanguinary priest for the E-bay. I also have 2 more in the works with even more magnetic options. Yes I'm preparing the next month's worth of E-bay models. My work will once again be interrupted for a week when filming starts for my friends movie Dead Weight. So I need some birds in the bush while I'm away. 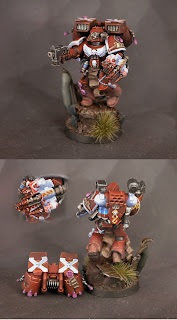 http://cgi.ebay.com/ws/eBayISAPI.dll?ViewItem&item=330551380808&ssPageName=STRK:MESELX:IT#ht_500wt_1156
Next up I've been working on a Vulcan He'stan. I have to say being from wisconsin the Salamanders green and yellow motif doesn't sit very well with me. If you don't know those are the colors of the green bay packers, our football team. I see those colors way too often and that combination, in my opinion, is a bit of an eyesore. I don't like painting things green and red either which just makes me think of christmas. He's being kind of tricky but I should have him up in a day or two.
Posted by samson at 12:07 PM 1 comment:

I have been to the mountain!

Well first I apologize for not posting in a long time. I alluded to a 10 day tour and a trip to Adepticon in my former posts, once all of that transpired I had no time for my blog, but holy shit do I have a shit load of shit to post now! Adepticon was a mixer, between a blast and a buzzkill I'd say. But I'll get to that later, first I just want to get back up to speed with my painting, there are bills to be paid after all, and sift through the madness of Adepticon. Tons, literally, of great models to choose from.
When I returned from Adepticon I got right back to the Rune Priest I've been working on. He's all Finished off and hopefully will soon be on his way to a distant battle field far from earth. We simply have waaay too many Space Wolves here.

Here's the link to E-bay
http://cgi.ebay.com/Painted-Space-Wolves-Space-Marine-Rune-Priest-wh40k-/330550989440?pt=LH_DefaultDomain_0&hash=item4cf65fd280#ht_500wt_1156
He was pretty fun to paint, I've been trying to add freehanded textures here and there and I think the underside and the edge of his pelts are a decent start. The chooser of the slain was fun to build too, I threw him together quickly as I figured his as just a bonus to the person who buys the Rune Priest, maybe incentive.
I've also been zazzing up another Sanguinary Priest. I snapped a shot of his basecoat yesterday. 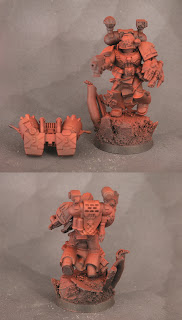 With a magnetized jump pack, natch. At the moment he's nearly complete and I'll be finishing him off after this and hopefully he will be posted up here tomorrow. Hopefully.
Well, I'll get around to that Adepticon post sooner of later. Until then, stay exactly where you are and don't move.
Posted by samson at 5:42 PM 2 comments: