The Well of Souls

Like an ever flowing stream it comes, when does it end? Where could I begin? Still they came, by the hundreds, by the thousands, the teens of thousands, en masse through obliteration. Always the question, how many more?

If you're Nagash you're hoping for billions! Oh boy what a bargain, can't beat free!

Happy Halloween to All! What follows is a shaky attempt at documenting the the process on this base. No way around it though, deliberately applied illustrative techniques are required. Also a little corkboard. 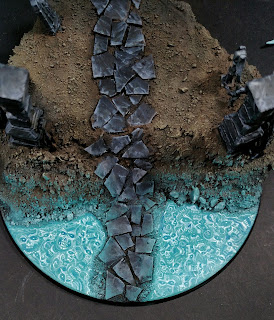 To start off the build, andost other build ups I do, some sheets of corkboard were broken up. I also used some wizkids scenery bits and some small wooden planks from a hobby shop.

The second layer was dirt, broken chunks of putty, and a few headstones where I could fit them. I threw some liquid greenstuff down to fill the textureout a bit..it worked not so well, I'd give it a C+ but after some sadning I found a decent result. 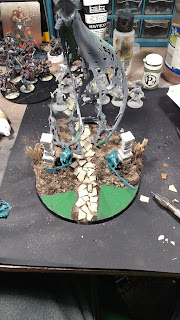 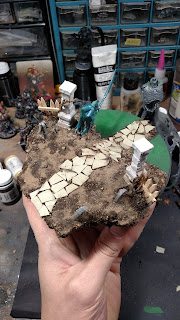 To begin, a turquoise base. 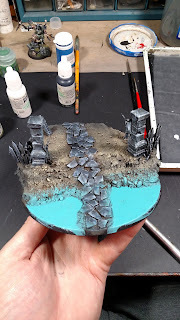 Next, draw the entire thing..It took some practice and the first pass of this was completely fucked so although you're seeing a snapshot, this was a couple hours spent gnawing at the paint. 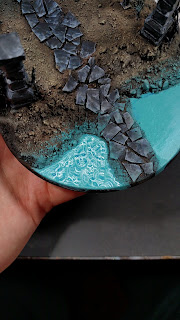 In this shot you can see me stepping across the pond, and it shows the process is built up in many gradual layers. 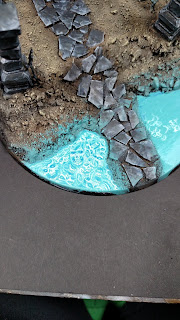 Then it was a matter of tweaking the design. Bringing brighter shades into the raised areas of the face and also creating depth with a medium blue in the recesses. 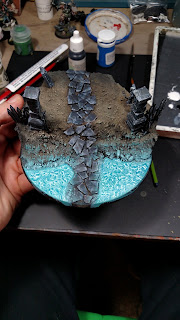 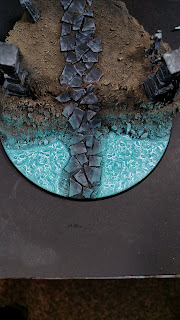 More to come, Nagash will sit upon this throne and the spectral legions will emerge, if not now, there is time. Everything dies.