Alright, just a Quickie before I go out into certain doom up on the dark slopes of wisconsin (sledding). 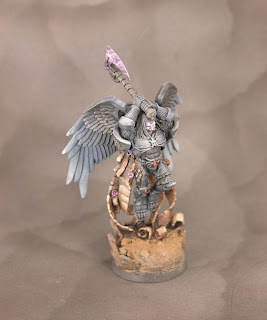 Following the suggestion of brother John I repainted this guy black. His armor at this point is 100% air brushed with the exception of applying a 50/50 mix of badab black and asurmen blue. Hopefully I'll be posting finished pictures of Astorath and a barbarian by reaper tomorrow :)
2 posts in one day! I'm thinking soon I'll try to do one every day of the week for one week just to see if I can. Wish me luck!
Posted by samson at 6:04 PM 1 comment: 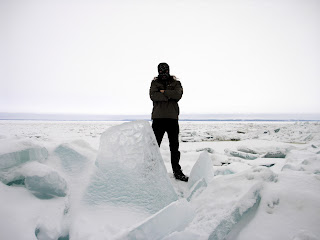 Over the weekend brother John and I ventured out on lake winnebago. I brought out my camera and snapped some really cool reference photos (pun intended!). Here I am being totally awesome among the ice shoves. Ice shoves are caused by the lake thawing and freezing throughout the winter months. I couldn't believe how beautiful it all was, so many cool tones, the perfect area for a model to strike static pose.

I also grabbed some shots of the surrounding foliage in the dead of winter. 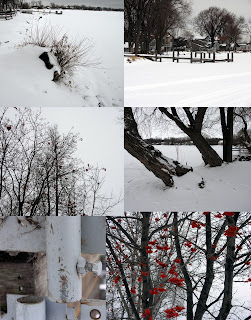 A very inspiring outing indeed. We had so much fun over the weekend, the next day we attached a toboggan to the back of brother John's 4 wheeler and I rode it for 6 miles! My ass is still sore, I think falling off at 20 mph, which happened a lot because I felt the need to surf, and being engulfed in a cloud of ice as your momentum pulls you across the snow was the best part. Or maybe haging on to the rear an "water skiing" with nothing but you boots! I inhaled a large dose of exhaust doing my trademark man of steel, you do this being dragged on your stomach and then letting go and taking flight across the snow. 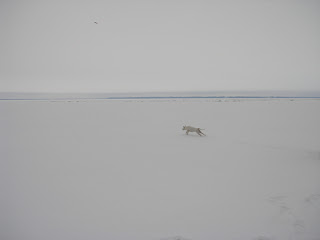 Posted by samson at 1:25 PM No comments:

The 41st millenium of christmas

In my last post I couldn't show all the work I had done prior to Christmas for risk of spoiling the surprise. Here's the Librarian that will be leading brother john's crimson fists.

http://www.coolminiornot.com/267665
I had a lot of fun modelling and painting this guy, I know I say that just about every time but this time was special as it was for my brother and I worked on him while I was drunk, which made my nerves much calmer and that is actually when I did most of the detail work. Brother John also got me a little something, a 12 pack of pabst blue ribbon 40oz's. Excelsior! 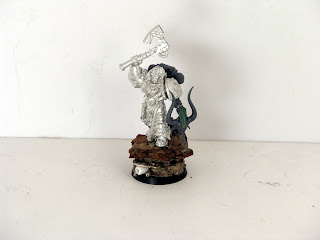 That's all for now :) have a happy holiday and try to do something different this year!
Posted by samson at 9:00 AM No comments:

So christmas is this weekend and because everyone else is on vacation I've decided to take the week and paint for myself. Before I share those projects I'm happy to say I finished the armageddon diorama from my last post. I'm happy it is over, this model was a nightmare to assemble. Once I had all the seperate pieces painted I very patiently watched them turn into a bunch of leporous glue nubbed space marines (calling something a spacemarine is an insult in my book) but all was not lost and I patched up the work I had undone and smashed this piece of junk with a hammer. Here's the end result :)

So with that out of the way and the pre-christmas week ahead of me I decided to do some painting for daddy. There's a tournament at my local store on jan 15th which gives me plenty of time to finish off my army. I got a start on these kommandos on sunday, they'll be rolling in behind enemy lines with Snikrot. 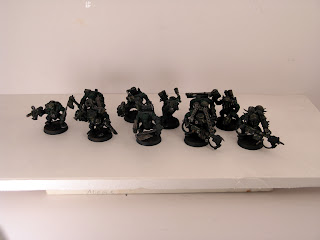 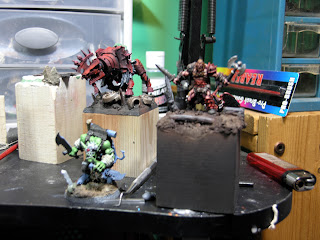 There's also a little showdown with a barbarian happening this week, I got him for my birthday (nov. 29) and have slowly worked him up to his present state. I have to admit the skin tone was inspired by street fighter 4. next week I'll be painting up snikrot followed by 6 slugga boyz the next week and finally a display board just in time for the tournament. That'll give me a fully painted 1500 point ork army and a fine dish to serve up the pain.
I've also decided on most of my adepticon crystal brush entries, not much painting done yet but they're coming along

The chaplain is the closest to the finish line at this point and I did manage to finish a piece but I can't share it because I'd be spoiling someone's christmas gift so more on that after the holiday.
Happy holidays!
Posted by samson at 2:14 PM No comments:

I finally got around to photographing those lamentor terminators. It was pretty daunting to face down 19 freehanded lamentors symbols but once that was over with I was in the clear and able to finish them in a rapid succession. I've noticed once a newer style of painting is applied to these older models they don't look quite as funny. The bright and clean style of the past has given way to a more realistic style for now with all the light sourcing and weathering going on but who know where miniature painting will go? 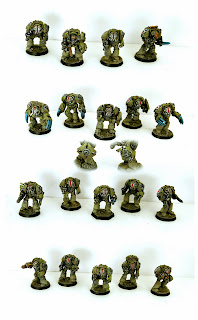 I've also shot a quick photo of a project that's been sitting for a little while. Now that I have these 19 guys out of my way I'll have more time for some of the single miniature projects I have coming up. 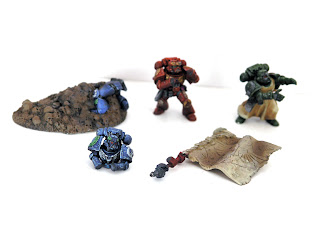 It's a table making Sunday

I think sundays to nerds is like 4:20 to stoners. It seems to me that a majority of gaming circles meet on sundays, I haven't done any research but since I'm typing it on the internet, count it as a fact. In my last post I noted that we're finishing armies and scenery but there was still a problem, a problem in the form of an over textured chunk of plywood apparently painted with grey and khaki enemas but I can't remember for sure.

After brother John sanded it down a bit I started by wet blending a few layers of greens and browns, some tonal variety counts for a lot so I made sure to use as many different colors I could get my hands on. I wanted it to have some dimesion instead of just stippling on the same combination across the board. here are some shots of how it began. This was very fun and I'd recommend it to anyone, especially the guy who hates his miniature paint jobs. "Looks buddy, you can be as messy as you want!"

As I went on I discovered it's easiest just to squirt the paint right on the table. I set a fan blowing on the surface and let everything dry. Then I tore up some paper, laid it down so it was leading away from the darker pits I left in the table and with the airbrush fanned paint away from the torn edge. once the base design was intact I sprayed on more texture but made sure to intersect the previous lines to create more of a cracked mud look. Then I lined out some of the edges and insides of craters.

It looks good for now but I want to try painting some grass on with some flick of the wrist drybrushing. I'm pleased with it so far though and I can't wait to play some games on it. We laid down some scenery and models and chittered away like little kids about making battlereports, a backdrop, and so on :) 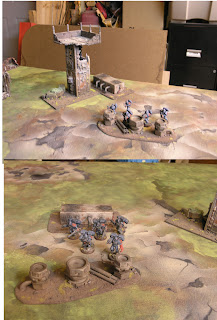 Those are brother Johns crimson fists, keep it up! I also snapped a picture of the cooling unit I semi posted last time. 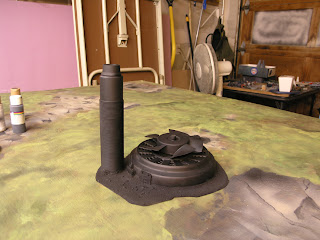 Well it's time to shoot some Lamentors which will compose my next post. I leave you with a familiar image of many sunday nights. 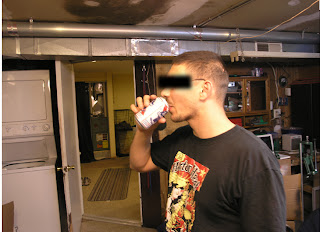 ( identity has been witheld for comedic value )

Here's a Lamentors dreadnought was commissioned to paint a few months ago, recently the same guy handed off 20 out of print terminators to be painted up as Lamentors as well. These old models remind me of the days of yore, when I was young enough to not only have no idea about the rules but also would play "warhammer" in a sand box. It was bass ass one guy had tyranids and we'd dig labyrinths in the sand...
So it's been fun painting them up over the last few days, I wanted to post a few in progress shots before I finish off the project. Right now they're just about ready for some battle damage. I think first I'll wash the lower half of the checker patterns with some thinned down badab black. It worked well on the helmets which were painted with 2 thin layers of white and then some codex grey was brushed into the shadows followed by a wash of badab black. They still need highlighting but I save that for after the batteldamage. 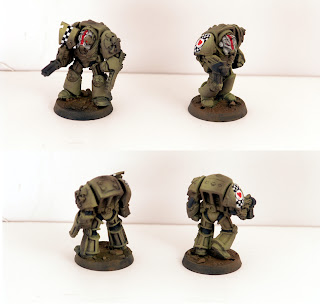 The colors are a little muted because I simply auto leveled the picture, I'll take decent ones once they're all finished. here's a picture of the whole group I took while going about the task of freehanding the Lamentors symbol on all 20 of their shoulder pads. and while we're at it let's look at the myriad of distractions that lie just inches away. 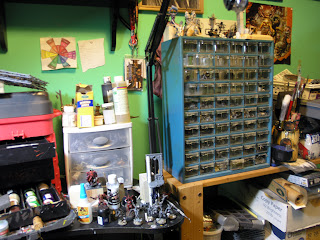 There's a unit of wyches hanging around that I finished assembling last night along with plenty more naked plasitc and metal. We'll see if I keep my tiny men can protect sanity through this winter, which just hit by the way, I do live in Wisconsin after all. Here's what it looks like around 4:00 when it starts getting dark. 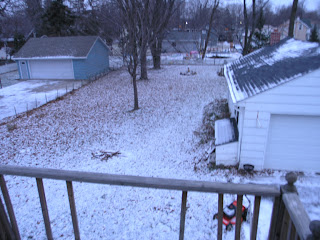